The History Of Basketball

Basketball is an exciting and engaging sport that has a rich history behind it. There are many interesting and surprising details on how basketball started, how the first game was played, and how the game has managed to evolve and stay relevant.

Join me as I take you through the history of basketball and uncover the fascinating facts about this popular sport. I will tackle questions like:

Dr. James Naismith’s continuous pursuit of learning and innovative spirit is an inspiration.

He was born on November 6, 1861 in Almonte, Ontario. His parents died of typhoid fever when he was young. His uncle raised him and supported him through his college education.

He graduated with a theology degree from the McGill University Presbyterian College. He continued his learning and pursued a relatively new academic discipline, Physical Education, from Springfield College (previously known as School of Christian Workers) in Massachusetts.

He began his career as a faculty at Springfield College in 1891 where he would invent basketball.

He later took up medicine at Gross Medical School in Denver. He received his medical degree in 1898.

He became the department head of physical education at the University of Kansas. He remained there until his death on November 28, 1939.

James Naismith, who was then a new faculty at the Springfield College, was tasked by his supervisor, Luther Halsey Gulick, to come up with a new game that would be suitable for indoors during winter. The class of young men needed an activity to motivate them while they are unable to play soccer and other outdoor games.

Apart from being suitable for indoors, the other requirements given to James Naismith were:

Taking Inspiration From Other Sports 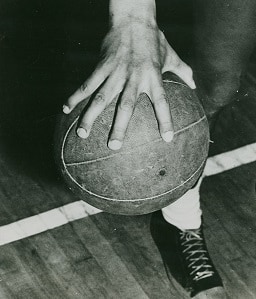 Dr. Naismith combined details from several sports to come up with the concepts for basketball.

The idea for using a suspended goal was to get the players to toss the ball into the goal instead of hitting it through a kick or other forceful motions. Duck on a rock was a game James Naismith played with his childhood friends back in Ontario, Canada.

Where was the first basketball game played? It was in the Springfield College gymnasium in 1891.

The first game was played quite differently from how basketball is played today.

Two peach baskets that were given to Dr. Naismith by the school janitor were used as the goals.

There were two teams, each having nine players. Each team was composed of three guards, three forwards, and three centers. This is unlike what we have today where there are five players in each team.

There was one referee and an umpire to officiate the game and to keep things in order. Two men were stationed near the goals. Their task was to retrieve the ball from the peach baskets after a shot was made. The bottom of the peach baskets were not removed until a few years later.

The game started with a jump ball. The two centers stood in the mid-court to grab the ball in order for their teams to get the first opportunity to take the shot.

The game lasted for a total of 35 minutes:

These are the original 13 rules of basketball written by Dr. James Naismith in December 1891. The rules were published in January 1892. The text below was taken from the Springfield College page on the birthplace of basketball.

After the first basketball game, the popularity of the sport spread quickly throughout the country. I have rounded up the most notable milestones of basketball in the below timeline.

The evolution of basketball continues. It has come a long way since it was invented in 1891. The original rules have been enhanced, measurements of the court and other details have been adjusted, and even what the players wear have advanced over the years.

The sport which was born out of a need for something new keeps reinventing itself to remain relevant with the times. This resiliency will ensure that the game we love will be here to stay.

Last Updated on: January 14, 2023
PrevPrevious5 Best Indoor/Outdoor Basketballs In 2023
NextBasketball 101: Everything You Need To KnowNext
Amazon Associates Disclaimer
As an Amazon Associate I earn from qualifying purchases.